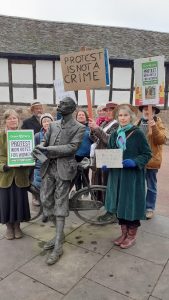 The Bill, threatening draconian measures to make protest a criminal offence, is at a crucial stage. Ellie Chowns, leader of the council’s Greens said:

"This bill is a threat to basic civil liberties right at a time when we need to hold government to account over so many issues. Our democratic right to protest is being eroded."

"There is a danger we will wake from our trance over ‘party-gate’, and other pantomimes, to find we have lost many of the liberties we take for granted. This legislation has become worse following a series of amendments that have been slipped into the bill at a late stage -  without proper scrutiny or debate. We cannot allow that. Please contact your MP about it, this weekend."

"The government sidestepped the Commons by introducing 18 pages of draconian laws as amendments in the Lords,  but if peers vote against them they cannot be reinserted."

Baroness Jones urged people to contact their MPs and members of the House of Lords immediately to ensure that they voted against the amendments to stop, outright, some of the worst measures of the Policing Bill.