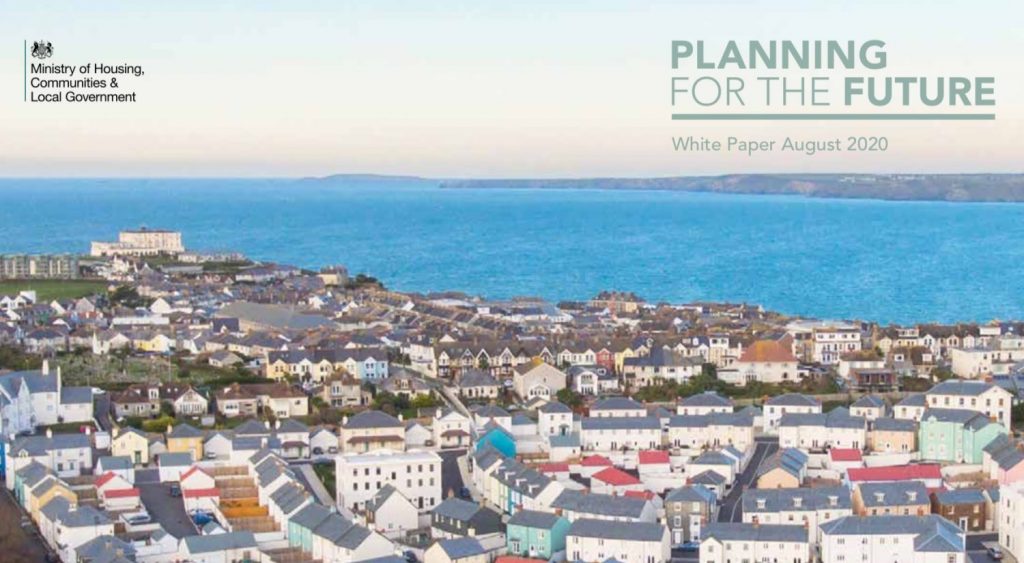 THE LATEST PLANNING REFORMS PROPOSED FOR ENGLAND ARE VERY CONCERNING

In recent times, Westminster has moved to exert ever-greater control over the planning system though incremental changes to National Policy and Guidance. Local decision-making has been squeezed, so that people have gradually had less and less say in what gets built in their neighbourhoods.

The latest proposals – promoted as the solution to England’s housing shortage - are much more radical, and are deeply worrying.

Organisations such as CPRE, Wildlife Trusts, the Town and Country Planning Association, and Transport for New Homes have raised well-founded concerns.

Even senior Conservative MPs have expressed doubts in the recent Commons’ debate:

“What is on the table risks eroding local democracy, reducing affordable housing and encroaching on our beautiful countryside” Jeremy Hunt

YOU CAN HELP STOP THESE PROPOSALS BECOMING LAW.

The Government is consulting until 11:45pm on 29 October 2020. The full set of documents on “Planning for the Future” are here.

You can respond through an online form on that webpage, or what we recommend is that you send an email to:

It’s important that as many people as possible respond, so please make the time to send in at least a short comment.

We’ve provided two different suggested emails for you to copy and paste (and edit). Scroll down to see them. To make your email more effective, please consider adding some personal comments on why this matters to you.

And include your name and postal address in the email.

A good starting point is this 9 minute video from CPRE - https://www.youtube.com/watch?v=b6g6EORy4Rs

We agree the planning system is over-complex, out of date and in need of reform, not providing many people with the homes they need and failing to value the climate, biodiversity or creating better communities.

However this white paper takes the wrong approach and indeed makes the wrong assumptions about what is actually wrong with the system, failing to look properly at the evidence and to understand the reasons for failed delivery of housing. It is a missed opportunity to address climate change, rebuild ecosystems and to bring forward proven solutions to the housing crisis including investment in local authority house building and a right to green space. It seeks simple answers without understanding the complexity of the problems. It is not based on the evidence available. It should not have been presented as a White Paper as it is nowhere near ready for legislation - it is entirely lacking in the detail in key areas.

We are opposed to this over-centralised approach which will damage local democracy and take away local control. This in turn can damage the reputation and confidence of the standing of property developers and the planning system in the local community. The failures including around infrastructure provision will have a detrimental effect on good neighbourhoods.

This white paper is part of a centralising approach which reduces the power of local government, undermines democracy and which fails to recognise the importance of local communities and local areas who should be at the heart of effective placemaking."

Whilst I recognise the need to build more houses in England, the proposals in the “Planning for the Future” White Paper are flawed:

They fail to address our climate, ecological and health emergencies.

The current proposal for housing to be ‘carbon net zero-ready by 2050’ is completely inadequate.

The bias is towards permitting new developments at the expense of nature.

A right to access to nature for all should be at the heart of these planning reforms.

Nothing is proposed to ensure that development takes place only in sustainable places with a commitment to a major shift from car journeys to sustainable modes of transport. Building in the wrong location leads to more traffic, car-based living, more isolation and less walking or cycling. We shouldn’t be forcing people to live car-dependent lifestyles in the future.

The single ‘sustainability test’ devised by central government is not satisfactory; it must take account of local circumstances.

The new infrastructure levy as proposed could be diverted into non-infrastructure spending unrelated to development and even ‘council tax reduction’.

The simplistic ‘zoning’ arrangement, dividing England into just three categories fails to capture the physical, social and environmental aspects of the country and is wrong.

I agree the planning system is over-complex and in need of reform and doesn’t provide many people with the homes they need, and it fails to value the climate, biodiversity or to create better communities. But the proposals in the White Paper ignore the real barriers to house building - the need for a land value tax, penalties for land-banking, and the resourcing of planning authorities to invest in good quality council housing.

1. The white paper fails to address the failure of the house building industry to bring forward developments which have been given permission but which developers are failing to build out, instead ‘land banking’.

2. The intention to zone land into Growth/ Renewal/Protected categories tips the balance of the planning system further in favour of large-scale development and land-buying industries. The zones are too broad and do not accommodate local characteristics. The designation of Growth and Renewal areas must be co-designed with local residents. Growth zones must first past environmental assessments / sustainability tests. The zoning system must recognise the importance of open countryside and other undeveloped land as distinct from designated land such as AONB, National Parks etc. Additional categories of land use are needed to allow local areas to set local targets, for example: renewable energy generation, food production, rewilding and nature, and nature-based carbon sequestration.

3. The proposals are in conflict with government policies to reduce carbon emissions, promote more active travel and less isolated lifestyles, and regenerate town centres. There is undue emphasis in the White Paper on accelerating the construction of homes in the countryside away from major urban areas. By pushing new homes so far away from jobs and services, in places where public transport is very limited and walking and cycling are not viable, the reforms are likely to encourage more car-based sprawl. It should be a requirement that all new homes should be designed suitably for working from home.

4. There is a fundamental failure to prioritise carbon reduction. Alongside the 10% net gain in biodiversity, there should be an equivalent commitment to carbon reduction.  Every development should not only be carbon neutral but should be generating more power than it uses. The current proposal for housing to be ‘carbon net zero-ready by 2050’ is simply not good enough.

5. I welcome the commitment to biodiversity net gain, but we need to go much further. Policy must address our biodiversity emergency and the catastrophic species loss in which land use - and loss - plays a crucial role. The metrics for biodiversity net gain need to ensure we fully recognise the importance of not losing a particular species or a long-established habitat such as ancient woodlands or wetlands when allocating areas for development.

6. Affordable housing spend needs greater prioritisation – while the white paper aims to provide at least as much affordable housing as under the current system it should be much more ambitious - particularly as regards affordable rented housing. A serious approach to affordable housing would also extend to withdrawing the right to buy legislation.

7. Infrastructure spending must be ring-fenced to ensure the necessary infrastructure is provided to fully support development, especially infrastructure for low carbon living and increased biodiversity - including electricity grid capacity, climate change adaptation, public transport, local shops and green spaces. Infrastructure levy money must not be used for other types of spend, unrelated to development or for ‘council tax reduction’. The new levy should not only be based on the type of housing but on the carbon and environmental credentials of a building and site, effectively offering a discount to those developers who build to the highest environmental standards.

8. The proposals have little to say about employment space. A joined up approach, looking beyond just housing, should consider the sustainability of future economies - with progressive design looking for example at ‘15 minute neighbourhoods’

9. The future role of local authority planning officers and committees is unclear. I welcome the idea of streamlining decision making if it helps bring forward more homes more quickly. Under the current system, both scrutiny and professional advice often result in the design of a development being improved during the planning process. It would be a backward step if this were lost.