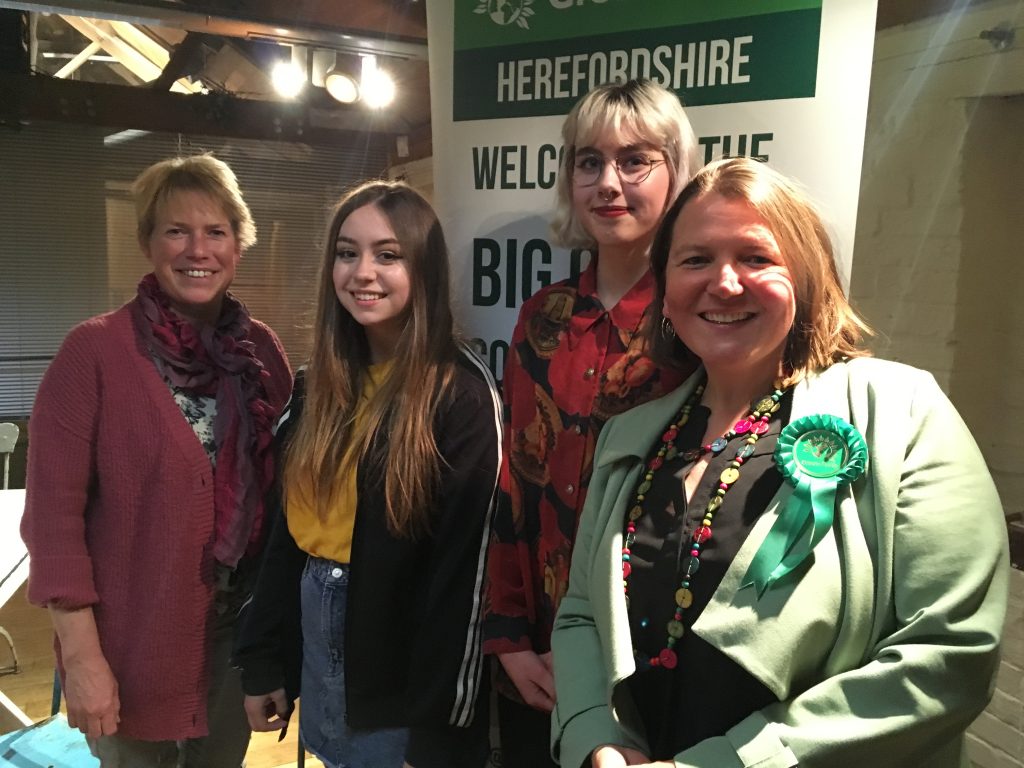 Hereford Sixth Form students from three political persuasions inspired a crowd of attendees at De Koffie Pot this week with their hopes for the future.

Mock Election candidates Anna Ricks (Green) and James McClelland (Communist) were joined by Campaign Managers Lily Andrews (Green) and Henry Jenner (Labour) to talk about their recent election campaign, what they had learnt, and their hopes for the future of politics.

They then joined in discussion at tables for a serious of topics including ‘What are the top worries for young people today?’, ‘What do we feel positive about?’ and ‘How do we engage young people more in politics?’.

Organised by Hereford Green Party but open to all, Big Green Conversations cover a wide range of political and ethical topics and take place every fourth Wednesday at De Koffie Pot at Hereford’s Left Bank. They are a relaxed, participatory and sociable event to which all are welcome.

Organiser Rob Hattersley said ‘These students were truly inspiring and a credit to their college and to Herefordshire. They understood the issues and although they had concerns for the future they also gave us a lot of hope.’

Top issues raised were not surprisingly tuition fees, student debt and poverty, and the need for better paid jobs in Herefordshire. Young people were also concerned about increasing division in education between schools who compete instead of co-operate, and a high-stress academic system which has implications for mental health as well as undervaluing vocational skills. They did however express real hope for the future of politics, with student Anna Ricks (Green) saying: “It seems that things need to get quite bad for people to get involved, so now we are seeing more young people engaged because it suddenly seems really important.”

Anna added: “We really enjoyed the evening. We felt very welcome and it was great to see older and younger people discussing important issues together and understanding each other.’

Henry Jenner, Labour supporter in the mock election added: “This is a great event which I’d recommend others to come along to, whatever party you support. In our election we actually found we had more in common with each other than we had thought.’

The mock election was won by Labour’s Adam Hill with 136 votes, second was Green Anna Ricks on 64, and third James McClellend (Communist). The Conservative and Liberal Democrat candidates, who could not attend the event, came fourth and fifth respectively. It is run most years at the college with Labour winning last year as well, and the Greens the year before that.

To engage more young people in politics, the students suggested lowering the voting age to 16, and proper political education for all from an early age, both of which happen to be Green party policy. They also warned older political activists against trying to be too clever with social media! “It has to come from us”, they argued.